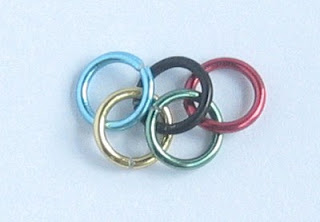 Olympic rings is the symbol of Olympic Games.

"The five Olympic rings represent the five continents involved in the Olympics and were designed in 1912, adopted in June 1914 and debuted at the 1920 Antwerp Olympics." ----from Wikipedia

It's for fun. The wire Olympic rings consist of five colorful jump rings. They are blue, yellow, black, green, and red from left to right.
If you repeat the five color jumps rings several times, you get a bracelet.